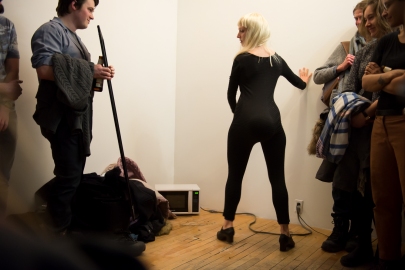 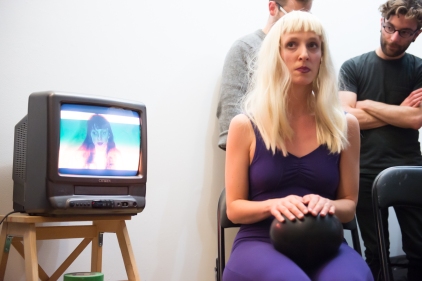 She enters to find herself amongst many. She finds her place amongst many.
She does a tap dance: a set of steps called the Shirley Temple.
She spits out 4 white lumps on the floor. She collects them and puts them in the microwave for 2 minutes.

She removes her jacket to expose a lump underneath her cat suit, on her belly.

She asks a man to hold a long mirror up for her.

I blew this balloon up in September. I’m really happy that it’s still a balloon. I mean of course it’s a balloon but I’m happy it didn’t go away. We can see some deterioration in the buoyancy of the tautness of the form. Over time, every time I come back to the balloon – because sometimes I forget about it, I’m touched by it’s disfigurement – how it becomes tender and more flesh like –more yielding and supple in it’s age. I like to imagine it as a living thing that allows me to feel it and offers me its vulnerability so that I can remember tenderness. And yet I give nothing back. Come sit beside me if you would also like to feel this balloon.

Two women come up to join her but there is only room for one. She feels the balloon for a small while and places the balloon between them. They (the woman and “she”) lean their shoulders into the balloon.
She takes the balloon and tapes it high up on the wall.
She draws a line with the tape that goes down the wall, across the floor and under a table on which there are four-dozen grapefruits.
She crawls under the table, lies on her back and extends her legs out from underneath the table.
She runs the tape over her long blonde wig, which she has been wearing since her entrance.
She knocks very hard on underside of the table. The grapefruits tremble.
She moves her legs as though she is running, or perhaps she is being held down and trying to break free.
She frees herself by taking off the wig and scooting out from under the table.
She gets up and goes back to the table, now taking the corners of the table cloth in her hands, preparing to attempt to pull the table cloth out form underneath the grapefruits.
She attempts and fails. Some grapefruits remain on the table and some have fallen to the floor.
She unpins the following articles from the wall: two yellow latex gloves, a short magenta wig and a pink belt.
She places them on the table
She retrieves a bowl of chocolate candies that was lying on the floor and places them on the table.
She places the white tablecloth over her head and puts the belt around her neck, over the table cloth. 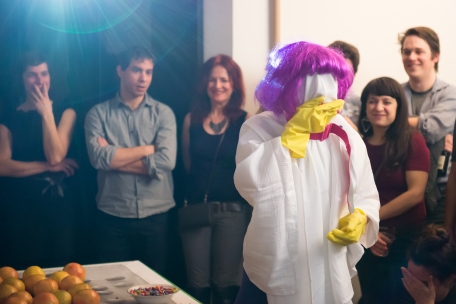 She puts on the yellow latex gloves and places the wig on her head.
She takes a handful of chocolate candies and attempts to put them in her mouth but because the tablecloth acts as a barrier, she cannot.
She crushes the chocolate candies with her teeth and can taste their sweetness through the cloth but she cannot swallow them. The chocolate stains the cloth and covers her mouth. The watchers are laughing, unsure if they are disgusted or enamoured.
She undoes the belt and removes the tablecloth.
She fetches a large cardboard pole and arranges it so as to make a flag from the white tablecloth.
She stands on the table and waves her flag, displaying the chocolate stain.

She thanks the audience. 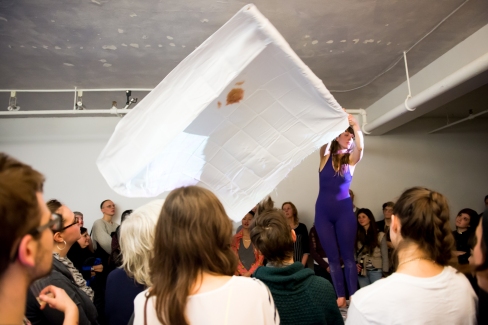